Tooth decay is the most prevalent childhood disease in our country, and it is completely preventable. Fluoridated community water is a key factor in reducing tooth decay for children and adults.

The mineral fluoride is naturally present in water worldwide. In some bodies of water there isn’t enough fluoride present to strengthen the enamel of teeth and protect teeth against cavities. In others, the fluoride levels are just right. Fluoride is added to the community public water supply by many communities in the United States to maintain enamel strength. This process is known as community water fluoridation.

Grand Rapids, Michigan, was the first city in the United States to fluoridate its community water in 1945. The rate of tooth decay among children in Grand Rapids dropped by 60%.

Before community water fluoridation, losing teeth early in life was commonplace. In the initial years of World War II, the U.S. Army rejected thousands of would-be soldiers due to bad teeth — the number of disqualifications “far exceeded all expectations,” the Army reported.

Times have changed. Today, nearly two-thirds of Americans drink fluoridated water, and many more benefit from food and drinks produced with fluoridated water. The portion of people aged 65-74 losing all their teeth has dropped by more than 75 percent since the early 1960s. But there is still work to do. Children and adults without access to fluoridated water continue to suffer unnecessarily from oral health problems.

Brushing regularly with fluoride toothpaste helps. But recent studies have determined this is not enough to fully protect teeth. The Centers for Disease Control and Prevention and the U.S. Department of Health and Human Services continue to recommend community water fluoridation, because fluoridated water reduces tooth decay by as much as 25 percent.

For both children and adults, fluoride mixes with saliva to neutralize acid in the mouth, strengthen teeth and protect them from future decay.  This is known as the topical mechanism. There is also a systemic mechanism of fluoride for children’s developing teeth.  In the systemic mechanism, fluoride is incorporated into the developing enamel and combines with phosphate and calcium to strengthen teeth from the inside.

For the past 75 years communities and individuals have been drinking water with adjusted fluoride to increase their chances of having healthy oral health. Fluoridated drinking water has been called “one of the 10 great public health achievements of the 20th century” by the CDC.  Community water fluoridation is recommended by many public health, medical, and dental entities. It is recommended by the American Dental Association, American Academy of Pediatrics, US Public Health Service, World Health Organization, and every U.S. Surgeon General.

Cities partaking in community water fluoridation see a great savings when it comes to healthcare cost. The price of water fluoridation being provided to communities varies based upon the size of the community and its residents.  In communities worldwide with a population of 1,000 or more there is a return investment of $20 per dollar invested. With fluoridated water, communities save about $32 per person in avoided dental care treatments, such as fillings, crowns, and extractions. 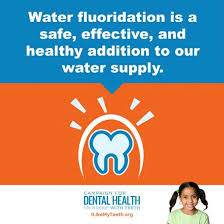